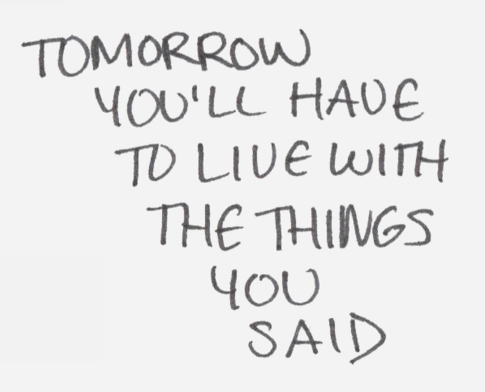 The video featured a potentially intoxicated sophomore sorority girl, sitting in a fast-food restaurant, lamenting the loss of a boyfriend.

The video ended up in the possession of the woman referenced in the recording. She, in turn, posted it on Twitter with the comment, “Its (sic) crazy that racism still exists here [on campus] can’t believe the color of my skin is “weird”.

The tweet was subsequently shared hundreds of times, each retweet more critical than the last. The subject of the video started receiving threats of violence, even death. Fear and anxiety made her afraid to leave her dorm room. Within days she left the university. Her life has not been the same since.

This may seem like a tale of how social media can damage relationships and reputation, and it is.

This may seem like a story of cyberbullying, and how words can open a floodgate of hate, and it is.

But this is also a tale of the power of the written word, the role of public interest in determining news value, and what responsibility student media has to also serve those who may not be able to serve themselves.

Student media became aware of the video about a week after its posting, as it went from random tweet to viral phenomenon. The debate ensued whether or not to cover it, and the scales toward publication tipped when editors reached student government officials who said they condemned the racist comments.

Some editors felt that statement escalated the news value—the story now had proximity, relevance, human interest and controversy. It gained currency when an unaffiliated online campus publication covered the story.

A student journalist got in touch with the woman who was the subject of and poster of the video and obtained a quote. The undergraduate student government video president offered a quote. Retweets tagged the sorority of which the sophomore speaker was a member, so the editors reached out there, too, for comment.

When concerns were raised about the ramifications for the woman in the video, the student journalist defended her position.

Argument for publication: This was news, because everyone was talking about it.

Arguments against publication: People say stupid things on social media that they later regret. The speed and ease of posting leave the less experienced to make mistakes they no doubt later regret. There are a variety of costs for that—loss of public standing, loss of jobs, loss of friends—but it does not mean it is worthy of turning into news broadcasted around the globe.

Argument for publication: This was news, because students need to learn from mistakes on social media.

Argument against publication: It is not news, because it had no relevance to readers beyond its salacious nature.

In the end, the article ran. And a young woman’s life has never been the same.

In addition to the original story, the student paper published her public apology and plea to be forgiven. But the hatred continued to spew. It lasted weeks—criticizing her body, her dress, her intoxication and her perceived racism. She stayed away from campus and tried to reclaim her life.

The news staff went on that year to publish many incredible stories filled with important news that campus needed to know. They revealed scoops, exposed wrongs, unveiled hidden heroes and made our students better informed about the world around them.

But this article sticks with me.

We hammer home news value as a cornerstone of journalism, helping to determine what information the readers need to know. We also drill in the ethics of reporting, including the SPJ Code of Ethics. And I believe some key aspects of the Code did not get the attention they deserved in this story, specifically those categorized under “Do no harm”:

Without media coverage, this story would have faded into social media oblivion.

But nearly a year after publication of this story, and it remains the top story in a Google search of the young woman’s name. Papers as far away as New York and England—yes England–picked up the story.

How long should an irresponsible comment, stimulated by teen heartbreak, captured on mobile video and shared by a third-party reflect on and impact a life?

I hope every student journalist will ask that question the next time they consider writing and publishing such a story.