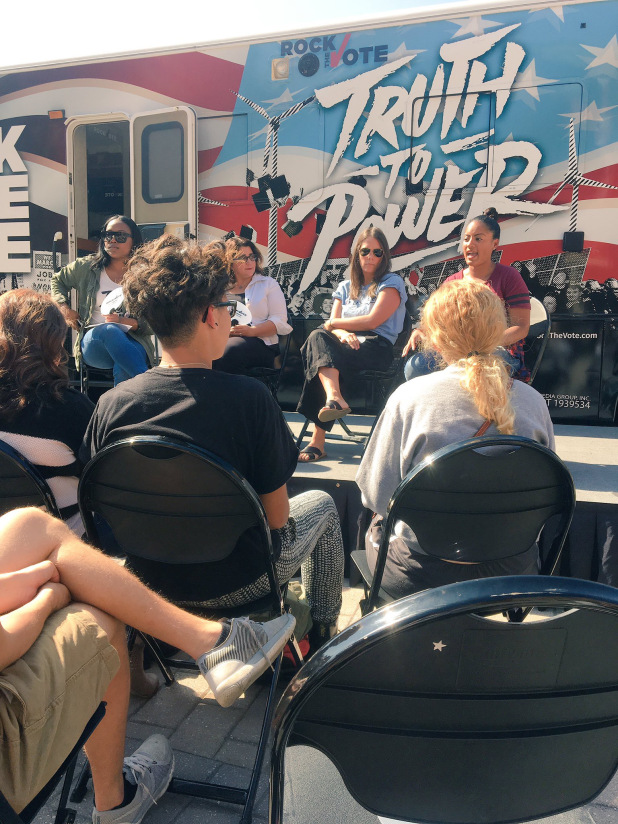 I was lucky last week to join a “Rock the Vote” team for a panel aimed at helping millennial women understand their importance to the 2016 election.

Our focus was non-partisan, but I’m sure you can guess the leanings of two liberal magazine editors (from Latina and Bustle) and a journalist-turned-journalism professor.

The question that resonated most with me, however, seemed to have little to do with the actual campaign. It centered around what young women should do to get ahead in the workplace, considering the many barriers that may be in their way from a corporate climate that can often be sexist and misogynistic.

The suggestions were good–get a mentor, work together, get tougher skin.

As the most experienced (read oldest) of the panelists, my advice went back to ’80s hair band Twisted Sister: We’re not going to take it anymore.

And after the airing of the Donald Trump-Billy Bush sexual garbage gab (aka locker room chatter) , I hope that advice resonates even more.

The banter caught on video in 2005 was repugnant.

Even worse was the defense: “It doesn’t mean anything; it’s just what men say.”

That theme was even supported at Ohio State in a Wall Street Journal report outside the OSU-Indiana football game, where the student pictured at left said, “Haven’t all men said some sexist things before?”

Uh, no, not all of them have, and most of them will never say they grab women by the crotch upon meeting.

But that is not to say that a lot of men haven’t taken liberties with women, and that women have not been forced to tolerate such behavior for generations if they want to be seen as good sports in the working world.

I was 11 years old the first time a man touched me in a way that seemed, let’s say, inappropriate. A family friend walked up behind me, grabbed my breasts, and said, “Getting bigger, aren’t they?”

A job at a sports wire service in Philadelphia at age 21 exposed me to a supervisor who often indicated our one-on-one meetings were over by running his hand down my back as I left his office and squeezing my butt.

I worked part of my way through college taking care of racehorses, where some men in the barn area thought nothing of calling women “cows,” “bitches” and “c****,” although when my father overheard the latter comment, he grabbed the speaker by the throat.

I don’t think anyone ever called me that again.

When I was a magazine editor in that same industry, handshakes were reserved for men. Greetings between men and women were more often punctuated by hugs, kisses and, as a rare treat, even bumps and grinds.

Now that I am in my 40s I see it for what it was–sexual harassment, pure and simple.

And we’re not going to take it anymore.

For me, one of the most disturbing part of the Trump tape–and there are so very many–is the manipulation of actress Arianne Zucker.

She is first prompted by Bush, “How about a little hug for The Donald?” before Bush goes in for one of his own squeezes.

She is then pushed around like a posable Barbie doll to walk between these two arrogant twerps before being asked which one she would date.

And through it all, she smiles.

As women, we are taught to do what Zucker did–laugh it off, provide the hug or kiss, chuckle in a good-natured, “I’m in on the joke” sort of way.

I am not in on the joke anymore.

I don’t find it humorous.

And I will never again pretend that I do.

A 2014 report by the White House Council on Women and Girls reveals some staggering facts:

Waiting to cross High Street last week, I heard a group of male students talk about female students so derogatorily that I immediately went home and grabbed my own, bewildered, 15-year-old son for a talk on what are unacceptable ways to talk about and to women.

I implored him to remember that women are his equal.

They should be valued, not demeaned.

They have the right not to be harassed, and I hope he will defend those who are.

They have the right not to be accosted, and I hope he will protect those who are.

I have a wonderful father who raised me to be a strong woman. I have an amazing and wonderful husband who respects and appreciates strong women. We are trying our best to raise a son who follows suit.

And to all the strong and wonderful women I know and don’t know, I implore you to stand up for who you are and how you deserve to be treated.

I beg you to vote this election like your integrity and self-respect depend on it.

We’re not going to take it any more.