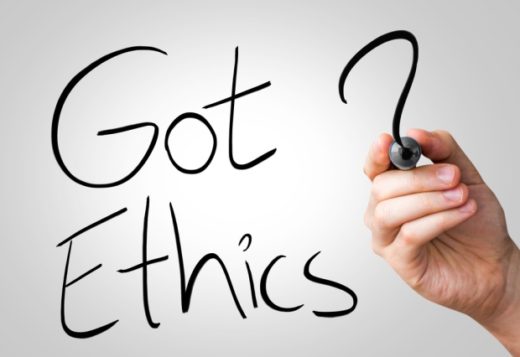 I focus much of my attention on sports.

But I root for few teams.

I am a sports writer.

And amid the challenges of learning box scores and the rules of hockey and wrestling, there is a little thing called sports media ethics that are getting tougher and tougher to teach.

The ethics of sports coverage are not complicated. There is no cheering in the press box. Players are not your friends. Free food in the press box is OK. Free tickets or T-shirts are not. Don’t wear spirit gear on game days.

There have always been people who wanted to cover sports to get close to players. I knew there were fans in our midst. But those who got into coverage of sports because of the stories to be told amid life’s most exciting reality show far outnumbered the “homers” among us.

But when teaching such rules to students who see journalism as a way to continue their sports-related interests and passions, there is more pushback than you might imagine when it comes to basic ethics and rules of the writing road.

Every semester, I show the video of Ed Littler, sports director at News 5 in Nebraska, who has an extremely uncomfortable exchange seeking an autograph “for a friend” from Iowa football coach Kirk Ferentz. My students squirm just watching it.

OK, no autographs, they say. We get it.

But what about the students who attended a College Football Bowl game and came back laden down with free backpacks stuffed with enough swag to rival an Oscar party? How do I explain to them that just because it’s offered does not mean it’s ethical to take it?

What about the Chicago fan who thought it would be amusing to wear his World Series Cubs jersey—the day we visited the AAA team of the same Cleveland Indians who, just months before, saw a 3-1 lead evaporate in the Autumn chill against the Cubs?

Try explaining to that senior in college he will need to change in the car or go home, because he is dressed neither appropriately nor respectfully.

How about explaining to students that it is inappropriate for media to partake in a T-shirt giveaway at an NHL game, only to find the off-ice NHL officials carrying the same freebie shirts up to their observation booth?

The rise in brand journalism and team-specific web sites that blur the lines between objectivity and advocacy have made teaching the former even more difficult. And student journalists who often attend a school because of its sports teams sometimes have an even more difficult time separating matters of the journalistic head and the 20-year-old heart.

Sports Illustrated recently published a story about sports media moving from objectivity to advocacy journalism, and cites the example of Michael Wilbon attending a Cubs playoff game as a fan and being asked to go live for ESPN—while wearing a Cub jersey. When he questioned the appropriateness, he was told by a producer, “Nobody will care about that.”

Uh, I care about that.

When the Vegas Golden Knights tweeted the accusation that the Nashville media pool cheered a Predators goal, the NHL writers cared a lot about that, demanding and receiving a retraction.

When I was a political reporter, I did not register with a political party. As a sports writer, I don’t even overtly root for the team I cover when I attend games with my son.

To cover sports is to love sports—or we would find a job with better hours.

But the great power of that job comes the great responsibility to check fandom at the stadium door, and remember we are to observe and report, not to advocate.

We may get free entry to games, but this is the price of admission.